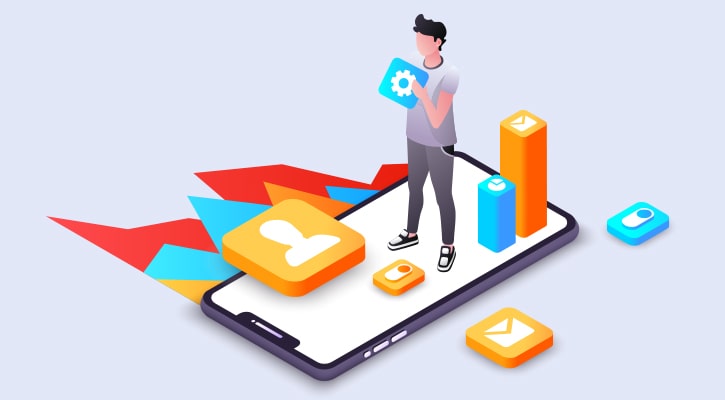 The numbers show to be increasing significantly fast. If we observe the data from 2018, collected from Statista, we are looking at 48.2% of all world traffic, being registered from mobile devices, excluding tablets. Even further, by the start of 2018, consumers downloaded 178.1 billion mobile apps to their smart devices.

Even further, 50% of all the smartphone owners, check mobile devices first thing in the morning.  There have been many debates over the increasing obsession with phones but statistics keep on increasing, with a projection of 2.87 billion smartphones being bought by 2020. More increasingly the lives of people are being revolved around their phones.

Mobile Applications are now used in the everyday decision-making process of many customers. Whether it will be where to eat (TripAdvisor) or what gadget to buy (Amazon), this process has almost completely transferred from desktop usage to mobile experience. People base their decisions on what they find on their mobile devices. The statistics show that 69% of 18-39 definitely use mobile devices to research products before a purchase

Such would be considered Facebook, Instagram, Linkedin and so on. The phenomenon of social media goes beyond any expectations with 3.46 billion active mobile social media users worldwide as of July 2019.

People do heavy mobile research before indulging in offline purchasing in almost all categories. In reality,  the statistics show the highest action and conversion rates come from mobile usage. 92% of those who searched on their phone made a related purchase.

It is said to be one of the fastest-growing industries in the world. In the Q1 of 2019, we were already seeing between 2.6 million Android, and 2.2 million iOS apps and this is only for the first four months of this year.

Mobile game apps are categorized as “money fountains” and many financial corporations have set their eyes on this lucrative opportunity. In July 2018, private equity firm KKR bought a $400 million minority stake in AppLovin. In 2019 Blackstone announced a possible acquisition of Vungle for approximately $750 million

The gap of revenues between the App Store and Google Store might seem significant but Google store surprises with a greater percentage increase. From 2017 to 2018 Google Store has a percentage rise in revenue of 27.3% whereas the App Store is at 20.4%. It is an interesting fact that between the two most famous mobile app stores, the Android Play Store has the highest number of applications with 2.8 million apps. Moreover,  with higher and strict coding standards, Apple App Store offers a total of 2.2 million apps to download in all categories.

Even further, conversion rates from mobile apps are three times higher than mobile sites. If only we look at the numbers in regards to the market size ($189B by 2020), this alone explains why so many companies have considered this is a profitable investment. The high conversion rates and direct marketing opportunity have influenced all major corporations to invest in developing their own mobile app. Moreover, small and medium-size companies are investing as well. In fact, 42% of the worldwide small businesses have already developed such an application to meet the needs of their business.

What is the first advantage of a business app? The conversion rate and the endless possibilities in terms of marketing. 72% of adults prefer digital communication with companies. When being able to connect to a customer through more than one channel, then a company will close a communication cycle, keeping the customer within the corporate identity. Hence,  the conversion and retention sales rates will eventually increase, because of the surrounding corporate presence.

Lately, multichannel marketing has evolved into omnichannel, with 87% of retailers agreeing that an omnichannel marketing strategy is critical or very important to their success. Omnichannel ensures the seemingly transition of communication from one channel to the other. A business application will be crucial for incorporating an true omnichannel experience.

With the advance of technology and the variety of options on the market, acquiring a mobile application has never been so cost-friendly. On the other hand, the intuitive design and highly performing functionalities cannot compare to the old technologies used for the codding of applications. Having in mind that mobile users are spending 87% of their time in apps, versus just 13% on the web, an investment in the development of a business app is said to have one of the highest ROI numbers.

The Future of Marketing 5 Must-Have Technological Advancements for 2020

Where to Find Us